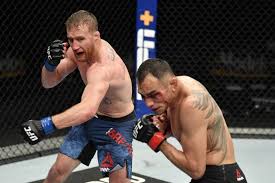 What did I say about Justin Gaethje just over a month ago? He’s a boss is what I said! Justin just beat an opponent Tony Ferguson that for nearly 8 years no other fighter was able to defeat. On short notice no less! He wins the Lightweight Interim title, Fight of the Night and Performance of the Night bonusses as well. Justin will have his hand’s full in his title shot against current champ Khabib Nurmagomedov whose undefeated with over-the-top ground ‘n pound and wrestling. If anybody can do it Justin can. GSP, who was just inducted into UFC’s Hall of Fame this last weekend may be able to get it done as well if they ever get a chance to square up, which I’d say there’s about a 50/50 chance of the fight ever happening. We’ll see. Spotting talent is a skill.