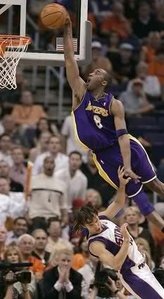 Kobe wasn’t perfect. I bought one professional sports jersey in my life, it was a Kobe jersey, back in 2000, while taking care of business in the bay area, with Spedia, Inc. Kobe was extremely competitive, ultra-focused and fully committed to whatever mission(s) he chose to accomplish. Kobe was an effective leader by nature and got the most out of his teammates. Kobe wanted the pressure shot when it counted most. As pressure increased Kobe’s focus increased, slowing the moment down for him to effectively pick it apart and have his way with it more often than not. His execution like MJ under pressure was impressive. It was great to watch over his amazing 20 year career in the NBA. Kobe believed in himself to help himself. He once said, “be your own psychologist” if that’s where you can help yourself. Kobe looked inward to solve his most complex issues which is admirable and cool. Invest in yourself, count on yourself and get it done like Kobe did. RIP Kobe!